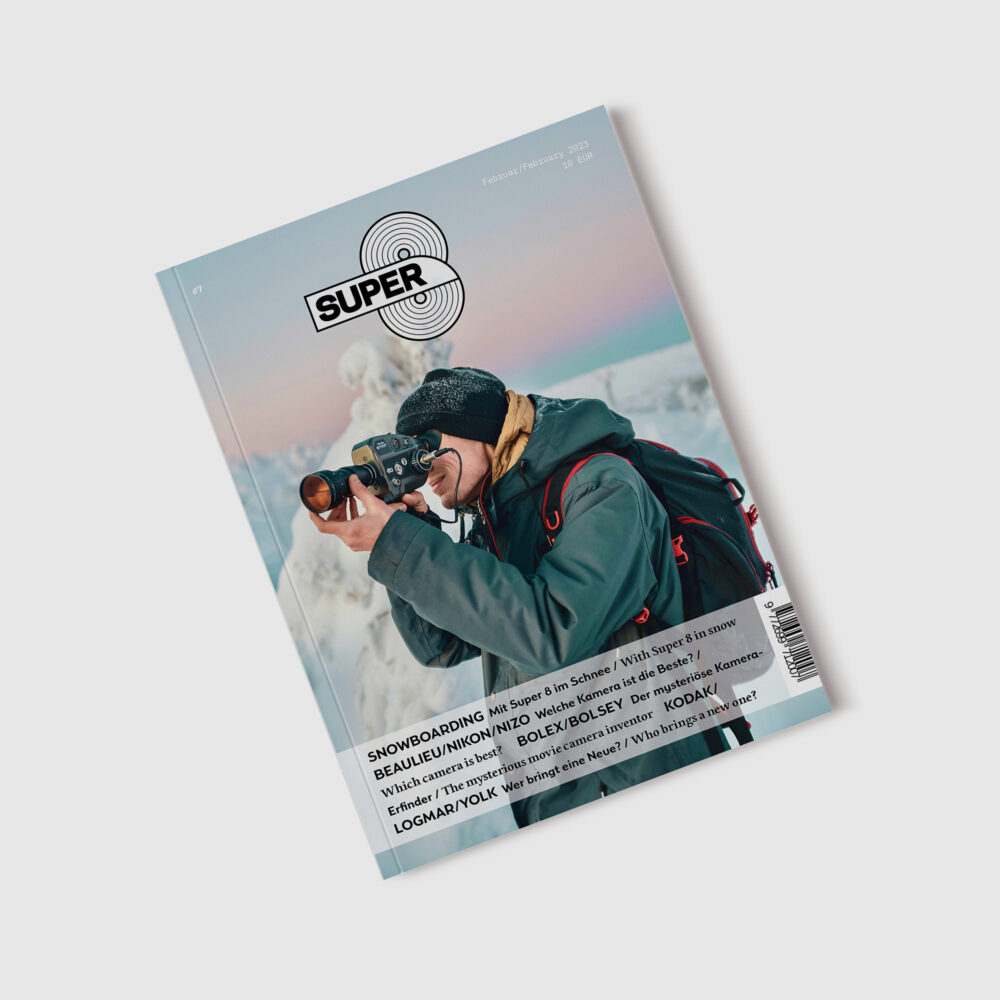 Super 8 Magazine #7 (shipping to all countries)

Nikon, Nizo or Beaulieu?
Which is the best? Film pro Zach Moore from New York reports on which Super 8 camera he chose after extensive testing. And as always: with QR codes that lead directly to the film test samples.

Young Super 8 star from Ukraine
A man flees Ukraine to continue doing what he loves best in Berlin: making movies and videos. And he did it effortlessly and grandiosely, even though it was Artem Shapirenko’s first time with this format.

Old cine star from Ukraine
Another one also comes from Ukraine: Yakov Bogolpolsky alias Boolsky alias Bolsey. As a Russian-born Jew, he became a citizen of the world. First he went to Switzerland, later he immigrated to the USA. Wherever he was, he invented movie cameras: Bol, Bolex, Bolsey. Super 8 Magazine tells his life story with many prototypes that never made it to the stores.

Snowboarding on Super 8
Wojciech Nieżychowski from Warsaw shoots adventures in the snow with a Beaulieu. His Polish Colombia Boys love snowboarding – and he’s always along for the ride. Sometimes on the board, sometimes behind the camera, sometimes both.

When is the new one coming?
There are nice prototypes of Logmar and Yolk on the Internet, but still nothing concrete from Kodak. How about the chances of a new movie camera in 16mm or Super 8 format? At least on one, work is progressing.

Three guys eastward
A western with an invisible horse. That could only be the brainchild of three wacky Super 8 filmmakers: Gunnar Grah, Andreas Kersten and Florian Rau. They filmed their Italo-Western-persiflage in Brandenburg – on a newly invented Cinemascope-imitation. The result is called “Acht Dosen Westwärts” (Eight Cans Westward).

Steven Spielberg gives small format movies a starring role
In the new movie “The Fabelmans,” director Spielberg traces his youth. And there’s a lot of 8mm and 16mm involved. We show pictures from the film and bring you quotes from the American master about his beginnings with cine film.

News: Orwo, Andec, Deidesheim
A new lab in France, one in Australia, a couple traveling in Super 8, competitions, changes at Andec, oddities from Orwo. And a preview of Deidesheim, the film fair par excellence.