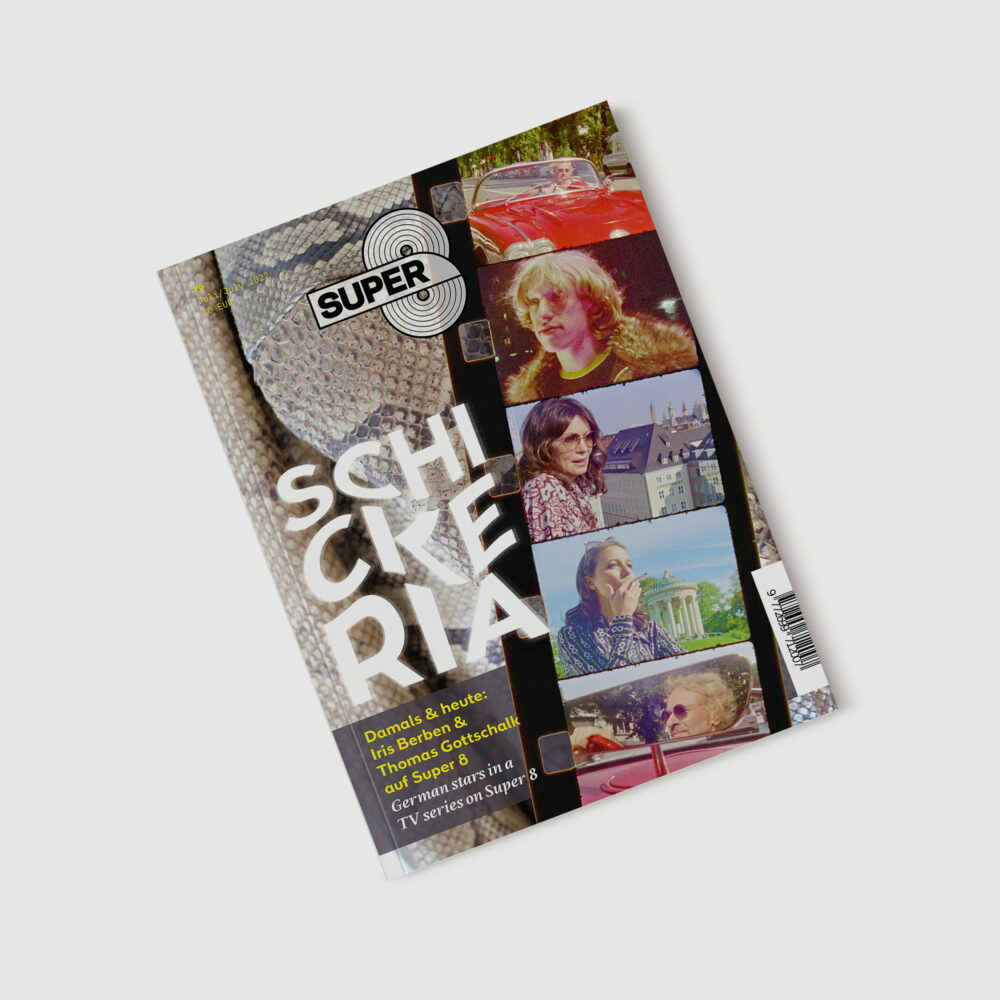 Super 8 Magazine #6 (shipping to all countries)

Schickeria – A TV Documentary on Super 8
The wild years in Munich: 1965 to 1985. That was also the heyday of Super 8. Many German celebrities remember, especially Iris Berben and Thomas Gottschalk. Large parts of this four-part series, which will be released on Amazon Prime in mid-August, were made on Super 8, especially the feature storylines of the young actors portraying Berben and Gottschalk. The Berlin-based specialty store for analog filming & photography, click & surr, had the great pleasure of overseeing the shoot with advice, cameras, Super 8 film and scans.

Lukas Fritz and his Filmomat
Since 2007, back then as a teenager, Lukas Fritz has been tinkering with automatic developing systems for film and photography. Finally his Filmomat is available for Super 8 and 16mm. We talked to the inventor, who is now a doctor of chemistry, about his unique product that fills a gap in the market.

The colors of summer
Francisco Pereira Coutinho from Portugal has a great idea: Every summer, when his extended family gets together, he shoots a Super 8 film – and it always has to be a music video. Everyone is happy to join in. But what looks casual has to be precisely staged. We talked to him about this modern form of family film.

Double Super 8 versus Double 8
One of them, Friedemann Wachsmuth, prefers to film with Double Super 8. The other, Patrick Müller, loves Double 8 above all. We asked both 8 the same questions and were pleased to get very different answers.

The man with the black box
Yuta Ikeya comes from Japan and now lives in the Netherlands. For 18 months he tinkered with his dream: a 35mm movie camera from the 3D printer. Now it’s finished and he can show us the first results he shot on it. In the interview, Yuta explains how the camera came to be.

All Eumig models in one exhibition
Finally they made it! It took the Eumig Museum in Wiener Neudorf a long time to gather all the film camera models ever made by the Austrian company. Now they are here and form the basis of a fabulous exhibition. Jürgen Lossau visited the opening and shows exhibits from 1932 to 1981.

Dagie Brundert makes it smell good!
Only Dagie can do that: At a workshop at the Münster Art Academy, she inspires participants not only with movie cameras, but also with the smell of the developer. You can mix so many things into it: Beer, Caffenol, willow bark, grass, cinnamon, chili or cocoa. Two weeks were spent filming, developing, editing and projecting. We show the best pictures of the workshop.

Logmar’s hasty march through the camera world
For less than four weeks, it was on sale as of May 2022: the new Gentoo Super 8 camera from Danish manufacturer Logmar. Then Tommy Madsen, the company’s CEO, announced they wouldn’t be building it after all. How did it come to that? And why were the previously introduced cameras only on the market for a short time?

They’re already rehearsing! 100 dancing Japanese girls at click & surr
Five years click & surr! The Berlin store for analog filming and photography has an anniversary to celebrate. And invites to a big installation: 100 Japanese twirling dancers will be on display on 50 Super 8 projectors. The event will take place in mid-October. In Super 8 Magazine, you can already see frames from the films that company boss Jürgen Lossau has unearthed on Single 8 films from the 1970s.